It all began in 2013 when I decided to interview my bridge heroes about their experience of playing bridge at the top level. My plan was to interview a Scottish player who was not very well, John Matheson, because I wanted to capture his views. Previously a GP, John said to me, ‘You want to get this interview before I die,’ which to some extent was the case. (He is still coaching younger players but no longer playing because of illness). He really enjoyed the interview and when I sent him the transcript, he gave me £300 to do more interviews with top players.

At the time I was on sabbatical in the United States, which gave me the perfect opportunity to ask some of the best players in the world for their views on bridge. I adapted John’s pilot interview to incorporate a full range of bridge topics including emotions, gender, couple’s bridge, partnership and team dynamics. My first candidate was the late Justin Lall because I was playing a Regional in Las Vegas and he was there too. I thought he would be a fantastic person to start with because I had read his blogs about bridge and he had interesting views.

I was right about Justin. He had all sorts of insights. He turned up a little late, making me nervous as to whether he would remember, but he did. I didn’t realise how long the interview would be. (The poor guy spoke to me for two hours without my even buying him a coffee.) I learnt my lesson and all my interviewees after that were offered coffee in advance.

My next interviewee was Jeff Meckstroth. I approached him at the Atlanta National in the summer of 2013. To my delight, he agreed. He was somewhat shocked to know that I would need longer than the usual bridge journalist, who would normally have five or 10 minutes with him before or after an important game. He offered me an hour, assuming that 60 minutes would be plenty of time. But of course, in reality, once we started chatting about bridge, it’s an easy topic to discuss. People love talking about bridge and he talked for nearly two hours. 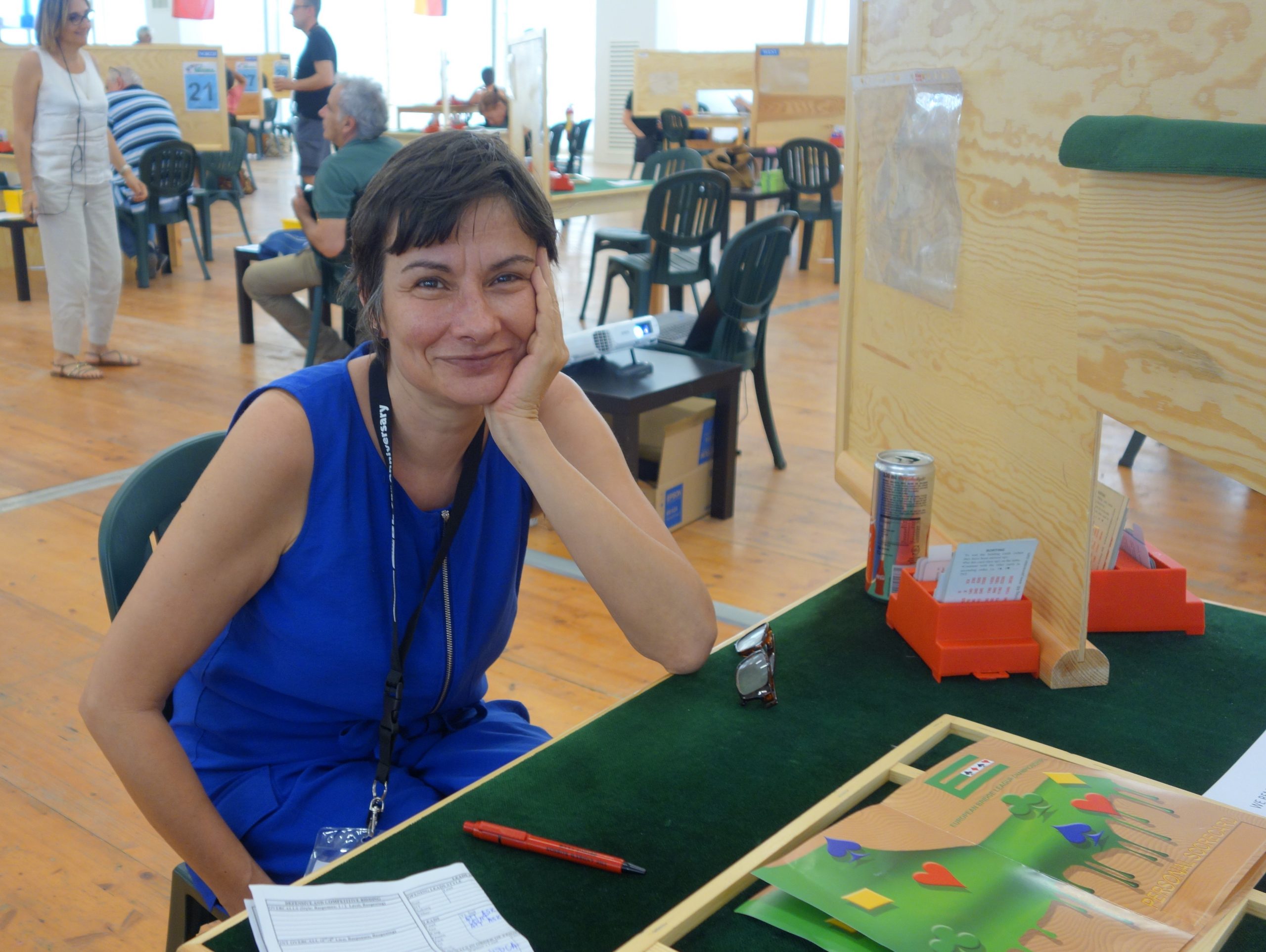 That’s how the project began, as a way to indulge my passion and bring together my skills from work and play. I assumed I would steadily accumulate data by carrying out a few interviews a year. I planned to have the interviews transcribed gradually, because it is a costly process. I was working with virtually no funds and it can cost around £100 to transcribe a long interview, word for word. I had John’s £300 pounds just to get me started and I was actually considering the work my retirement project. I’d build up a body of data and when I retired, I would write a book about the mindsport of bridge from a sociological perspective. But as I did more and more interviews, each one was fascinating. Most of them were very in-depth. On average, they were two hours and the longest one was four hours. The interviews were a sociological exploration of the dynamics of the game at and away from the table. It felt criminal to sit on such revealing data and not do something with it.

At the time, I was also becoming frustrated with childhood studies, an area I had been working on for 20 years. I was becoming a little bit stale. I was struggling to have new ideas for projects and new things to say. I began to think about combining work and play more officially and carving out some paid time for the bridge research. If the game became my research field, I could do it during my working day and not just as a hobby in the evenings or at weekends. With a full-time job and a busy international bridge-playing schedule, I already had little free time.

Meanwhile, the interviews continued, and small amounts of money came in. John kindly asked Bernard Teltscher to contribute. He agreed to donate £300 for three years, which enabled more transcriptions to be done. I also had some amazing volunteer transcribers including Moira Bain (from Stirling and Union Bridge Club) and Stephen Peterkin (my bridge partner) who transcribed for free. I had students who transcribed relatively cheaply. A lot could be done with very small amounts of money and the dataset grew. I also supervised other students who carried out particular tasks for me, sometimes on a voluntary basis to learn research skills, sometimes for small sums.

While the research team helped to sort and code the data for preliminary analysis, the project was growing steadily. Occasional donations helped, and I plucked up courage to approach wealthy bridge players with requests for funding. Some said yes, others declined. 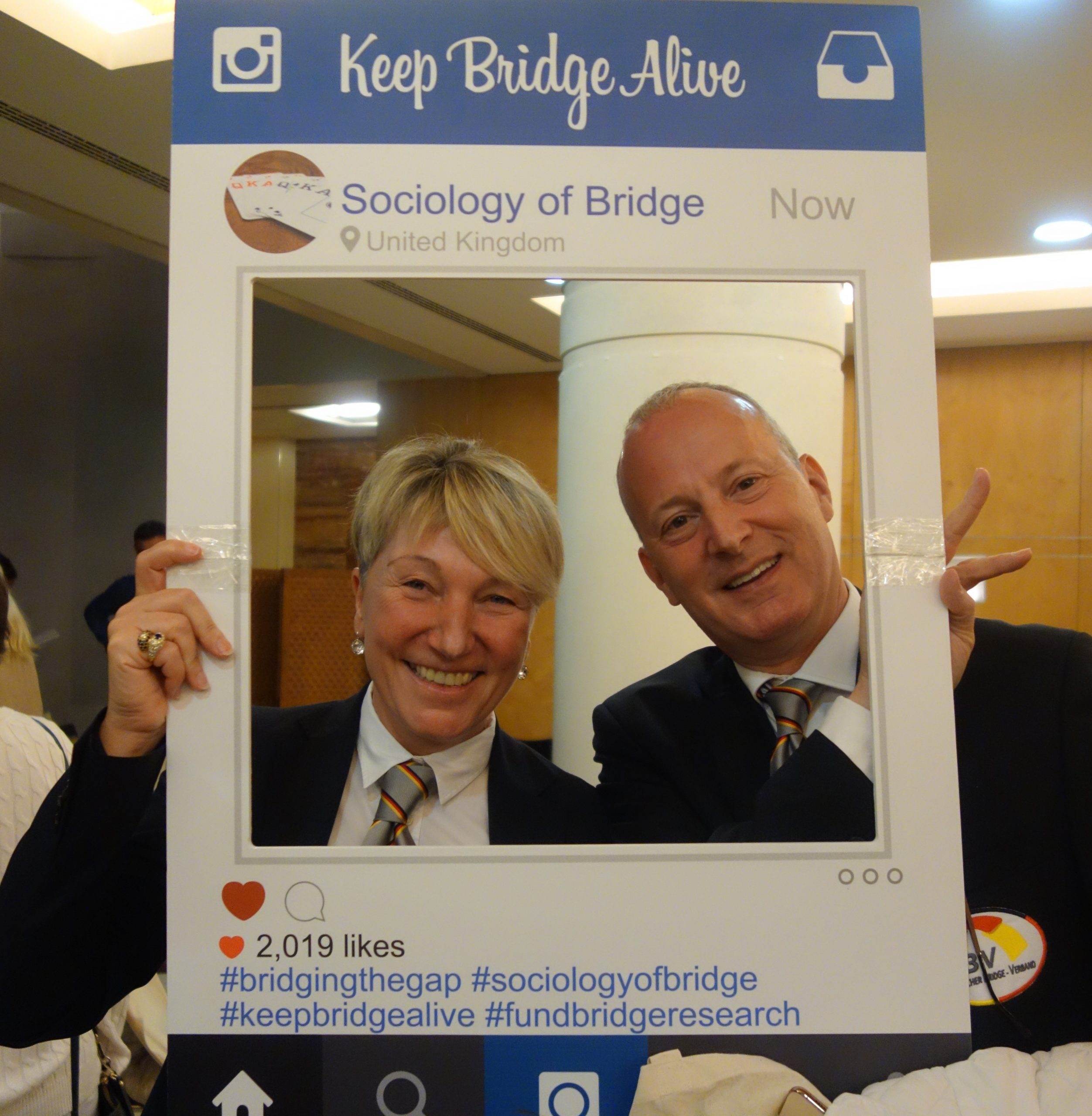 Sabine Auken and Roy Welland were interviewed for Bridging Minds

Following conversations with the University of Stirling, the university developed a crowdfunding campaign in February 2019, Keep Bridge Alive (KBA). A year later the university helped organise a professional-amateur event which took place a few weeks before the Covid-19 pandemic gripped the country. Television presenter and poker player Victoria Coren Mitchell made a special appearance at the event, which on its own raised £56,000, while the online crowdfunder raised £33,000.

At the same time, I was also fundraising around the world. During 2019 I played in national bridge competitions in Scotland and England. At an international level I competed in Portugal (European mixed championships), USA (Spring Nationals), Norway (women’s teams), China (Venice Cup) and Turkey (Open Europeans). Wherever I went I distributed funding leaflets, put up displays, gave short presentations and answered questions about the project. It distracted me a little from my bridge playing at these events, but it was worth it to raise further research funds.

A range of players, bridge organisations, bridge clubs and bridge-playing sponsors (wealthy individuals who fund bridge teams to play in top events), donated varying amounts from as little as £5 and as much as $20,000. Most small donations were around £50 and larger donations were about £2,000. It varied enormously and it was a lot harder to raise the money than we had anticipated.

The campaign was planned to last just two months and we hoped to raise £45,000 in that time. It was very slow and, despite writing to 800 bridge clubs in the UK, we had direct responses from fewer than 20 bridge clubs in the UK. That was disappointing and I soon realised that people needed more information before they would support the initiative. 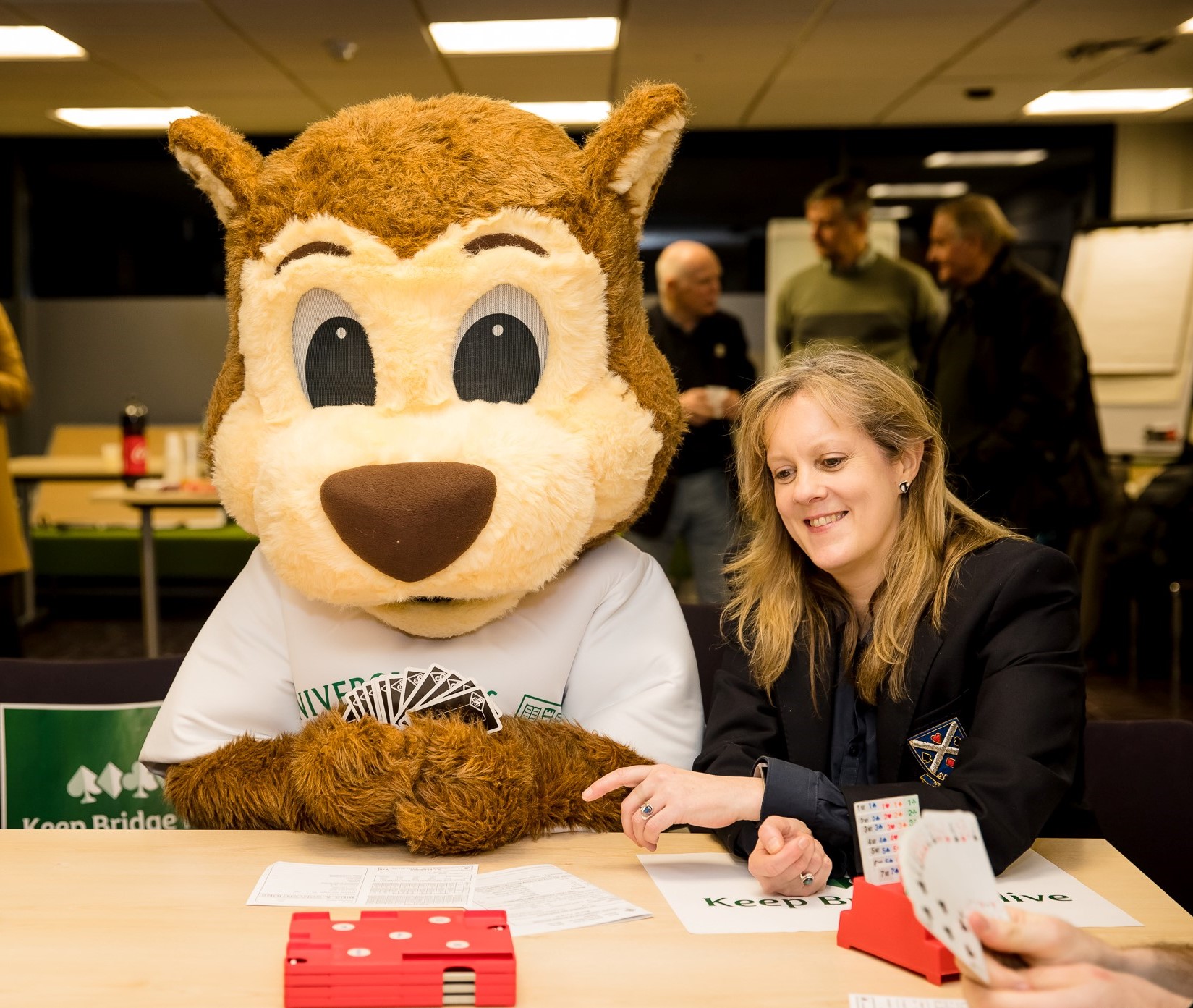 Initially there was a lot of scepticism. I faced countless questions and concerns about exactly what the money was for, what the intended outputs were and how research could practically benefit the bridge community. That scepticism forced me to work hard to convince the bridge community that this was a beneficial opportunity. It also motivated me to articulate more clearly what we were trying to achieve and to present the arguments in the most appropriate way. It was a learning journey, and one that continues.

BAMSA’s aim is to use research findings collaboratively with bridge organisations to meet three key aims: increased participation, image shift and sustainability of the mindsport. But it takes time and effort to build trust and understanding. It involves making high-level presentations (to the executive committees of the European Bridge League and the World Bridge Federation, for example), analysing the needs of stakeholders and managing the expectations of research partners. For most non-academics, for example, the length of time between fieldwork and publication (often several years) seems exasperatingly long and project partners had to accept that robust academic research does not produce immediate results.

The fundraising endeavour lasted 14 months, but it was invaluable. By the end of it we had built relationships with a range of stakeholders from across the bridge world: individual players, club organisers, teachers, sponsors, suppliers, people who provide bridge services, as well as national and international organisations. The BAMSA steering group and global network emerged from this process.

Victoria Coren Mitchell made a guest appearance at the launch of Bridge: A MindSport for All on 20 February 2020

In terms of projects, the first was Bridging Minds (the interviews with elite players) and the second was Bridging Wellbeing (the survey of 7,000 in partnership with EBED). Both of these studies, particularly the elite study, generated data on gender and bridge. With Liz Graham, a PhD researcher at the University of Stirling, we analysed the gender aspects of the interviews and she based her Masters thesis on that data.

We extended the gender work with an email questionnaire for both men and women focusing specifically on sexism in bridge. Working with me on that project was Ashley Rogers, then a Stirling PhD student and now a lecturer in criminology and criminal justice at Abertay University. Both of those datasets on gender have been analysed and we are now working on academic papers on Bridging Gender in mindsport.

In October 2018, after a long period of recruitment and publicity for the sociology of bridge doctorate, Kevin Judge joined the team as the PhD researcher. Around this time we started to develop ideas for the KBA fundraising campaign which we launched in February 2019.

Funding has been vital to the success of the project. At first I relied on volunteers and on PhD students paid by the hour to do small tasks, among them Zoe Russell. That was all I could afford. Zoe has been a BAMSA research assistant since 2017, initially helping to code, analyse and write up the data for Bridging Minds and producing many short videos for the KBA campaign. More recently (October 2020) we had success publishing the first BAMSA journal article together.

As the project attracted more money and became more successful, we could afford to employ a researcher on a more regular basis. The first person we appointed on a temporary three-month contract was Dr Miriam Snellgrove. In July 2019 the BAMSA team came together for the first time when Miriam, Zoe, Kevin and I presented four bridge papers at the Leisure Studies Association annual conference in Abertay.

Shortly after Miriam started her contract, more money became available. At last we had the funds to recruit a part-time researcher on a longer-term basis. At the end of the recruitment process, Miriam was the successful candidate and the first BAMSA research fellow. Her fixed term two-year contract to work three days a week started in November 2019. 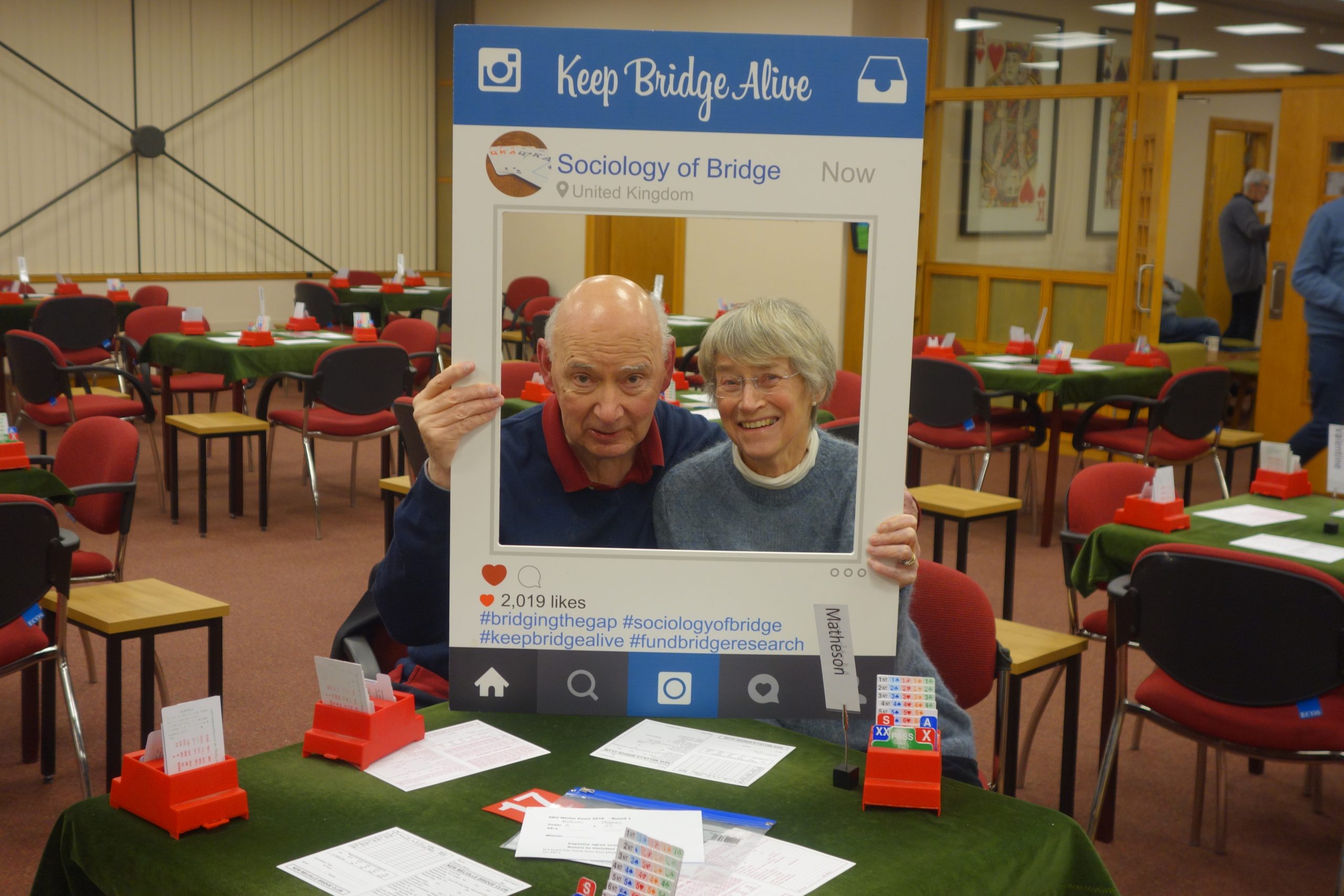 John Matheson’s donation sowed the seed of Bridge: A MindSport for All